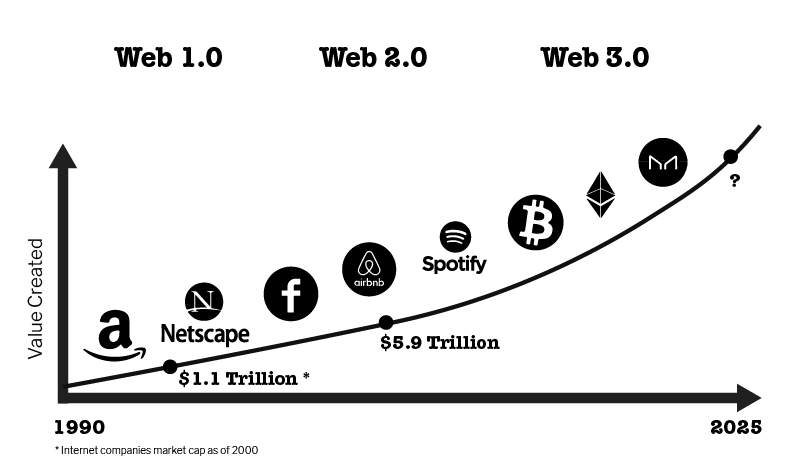 I've been thinking a lot about what makes something "disruptive." Sorry, I know, that word has been played to death. I wish I could think of another word that doesn't make me sound like a soulless tech bro douchebag but it's descriptive and the copywriter in me mandates "clarity above all else."

The thing about disruptive revolutions is that the ones who get disrupted are the ones who are trained to NOT see it coming.

A competing fax machine network protocol was always possible in its heyday. But once a large enough network is established (Metcalfe's Law) incremental improvements are not enough to overthrow a network. Especially when the incumbent network's capabilities can be improved upon by layering improvements onto the base protocol.

It took something exponentially better to supplant fax machines. It took the internet.

Exponential improvements operate at the fringes of technology where our understanding of the rules and potential applications are largely uncharted.

There are some serious exponential improvements that most don't see coming. The people working on finance, games, art, and social networking who still don't understand blockchain are going to get their faces ripped off.

Despite providing all the actual content, users capture none of the revenue generated by social media platforms. Both the profits and actual control of the platform belong solely to the corporation that owns it. The decisions are made for the benefit of the shareholders and not the users.

Web 3.0 will democratize the platforms that enable the exchange of value by returning ownership and profit back to the creators themselves.

Google did the same thing with the Yellow Pages, Airbnb with travel, and there are many other examples.

The problem, as Naval Ravikant put it, is that the internet demolished middlemen and replaced them with thin monopolies. But blockchains liberate us from intermediaries altogether.

Like fax machines in the 80s, present Web 2.0 incumbents like Facebook have amassed massive network effects that are very difficult to overthrow through incremental improvements. Web 3.0 is the exponential improvement that will supplant Web 2.0 firms.

Open protocols have superior network effects and are more censorship-resistant but lack the capitalization and coordination to scale development. This is why a well-capitalized dev teams at companies like Google or Facebook can achieve monopolies over an open protocol. When you boil it down, it's an incentive problem.

Blockchains fix the incentive problem. They allow contributors to be compensated based on the value that they provide (be it as a developer, content creator, etc.)

The video game industry is another good example. Video games are a $120 billion a year industry much of which is digital goods. The publishers of the games on which these sales take place take ~100% of that.

Games whose virtual goods are built on blockchains are changing this dynamic. Axie Infinity, which generated over $1 billion in sales last year distributes most of that revenue back to the users within the community based on the value they generate for the ecosystem.

It's a peer-to-peer system where players fund each other, not just the developers.

In music, 99.8% of musicians make less than 50k a year. Most of the revenue from streaming is captured by streaming services and record labels. NFTs allow the musician to keep 90% of the revenue and be supported by a smaller, more niche group of fans.

The internet allows any two individuals to transfer data without permission and with almost no cost. Blockchains also eliminate the friction of cost and permission but for the exchange of value. Social communities will be built around the exchange of value, not just data. In other words, Web 3.0 creates markets where the users and contributors can now be rewarded for the value they create.

The worlds of games, finance, social media, music and other forms of content or value exchange are all undergoing massive change.

Buckle up ladies and gentlemen, it's going to be a fascinating ride toward a more open and democratized internet exploding with new opportunities.

Did you enjoy this?

If so you might want to check out my newsletter. Get my best, most actionable insights on growth, productivity, automation, psychology and life delivered to your inbox 1x a week. Guaranteed to be totally gangster.